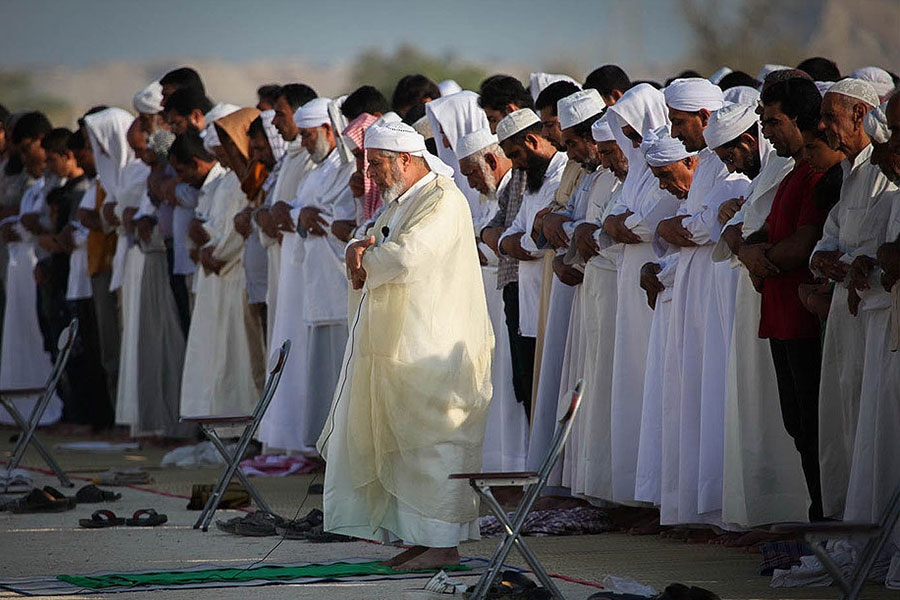 The folding of hands in front by one who is praying is considered an innovation (bid'a) and is forbidden in lmami fiqh. Imam 'Ali said:

'The Muslim should not fold his hands in front of him while praying, standing before God; [for, should he do so] he would be like the disbelieving fire-worshippers. [1]

Abu Hamid al-Sa'adi, a great companion, reported in front of a group of other companions-including such figures as Abu Hurayra, Sahl Sa'adi, Abu Usayd Sa'adi, Abu Qutada, Harith b. Rub'i and Muhammad b. Muslima-the precise manner in which the Prophet prayed, naming all the most subtle as well as the most basic recommended practices; but he said nothing about such a practice as the folding of one's hands in front of one.[2]
It is clear, then, that if the Prophet had prayed in such a manner, even occasionally, he [Abu Hamid al-Sa'adi] would have mentioned it, or at least, those present would have done so. Similar hadiths to this one have been transmitted to us from Imam Sadiq, through Hammad b. 'Isa, and are recorded in our books of Hadith.[3]

We can also usefully take note of the hadith of Sahl b. Sa'd which tells us, implicitly, that the folding of the hands in the prayer came about after the Prophet's death. He said: 'The people were ordered to do so '[4] if this action were ordered by the Prophet, the order would have been explicitly connected to him .