Why is Imam Ali (as) regarded as the successor of the Prophet (S)?

Beliefs & Creeds » Prophethood & Imamate
Why is Imam Ali (as) regarded as the successor of the Prophet (S)? 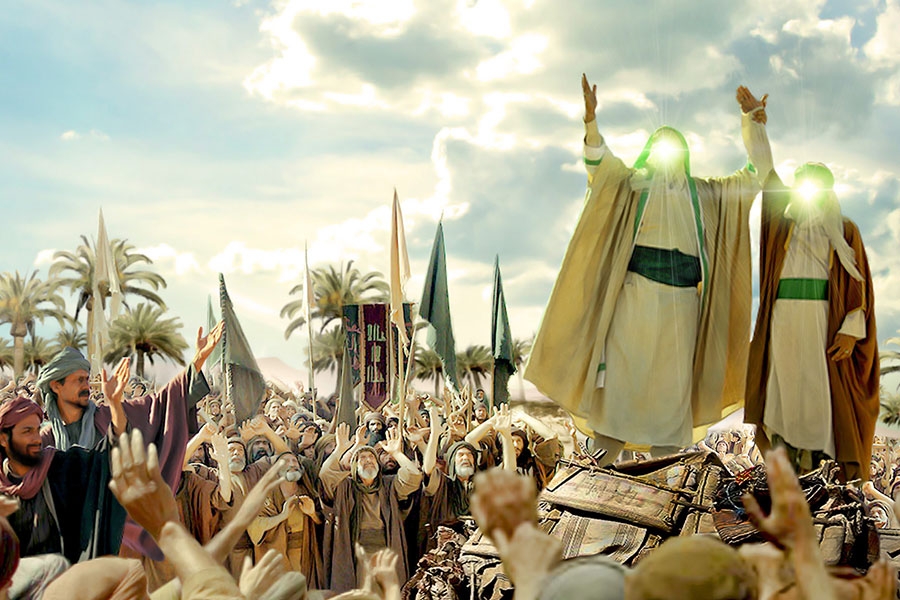 3075 0 share 0
Related Links
The sources of Shi'i Jurisprudence and teachings
The foundations of Shi'i jurisprudence are the Scripture, the Sunna, the intellect and consensus (ijma'). The Sunna refers to the speech and...
Islam & Religions » About Islam
Event of Mubahalah
In the south of Arabia, there is a place called Najran. There lived the Christian tribe of Najran who staunchly believed that Prophet Jesus ...
Qur’an & Ahl al-Bayt » About Ahl al-Bayt
The Revelation of Sura al-Dahr (story)
Once when Imam Hasan (A) and Imam Husain (A) were children they both fell ill. When the Prophet (S) found out about the illness he suggested...
Qur’an & Ahl al-Bayt » Stories and Narratives

The Shi'ah have a firm belief that the position of caliphate is determined through revelation {tansisi} and that after the Holy Prophet (S) the Imamah {leadership} is in some respects like prophet-hood {nubuwwah}. Just as the Prophet (S) has to be appointed through Divine decree, the wasi {executor of will} of the Prophet (S) too must be designated by Him, the Glorious and Sublime.

The biography of the Messenger of Allah (S) is a testimony to this belief; for, in many occasions he designated ‘Ali (‘a) as his successor {khalifah}. Here, we shall mention only three of these occasions:

1. At the Commencement of the Prophetic Mission

When the Prophet (S) received from God the commission to invite his relatives to the doctrine of monotheism as it is confirmed by the verse,

he addressed them by saying:

فأيكم يوازرني في هذا الأم على أن يكون أخي ووزيري وخليفتي ووصيّي فيكم؟
“Which of you will assist me in this affair so that he would be my brother {akhi}, minister {waziri}, successor {khalifati}, and the executor of my will {wasi} among you?”

The only person who gave a positive response to this heavenly call was ‘Ali ibn Abi Talib (‘a). Then, facing his relatives, the Messenger of Allah (S) said:

"إن هذا أخي ووصيّي خليفتي فيكم فاسمعوا له وأطيعوه."
“Verily, he (‘Ali) is my brother, the executor of my will and my successor among you. So, listen to him and obey him.”2

2. During the Tabuk Expedition

أما ترضى أن تكون منّي بمنزلة هارون من موسى إلا أنه لا نبيّ بعدي؟
“Are you not satisfied that you are to me as Harun (Aaron) is to Musa (Moses) except that there will be no prophet after me?”3

That is to say, “Just as Harun (‘a) is the executor of will and the immediate successor of Musa (‘a), you are my successor.”

On his return from the Farewell Pilgrimage {Hajjah al-Wida‘}, at a place called Ghadir Khumm the Messenger of Allah (S) introduced ‘Ali (‘a) before assembly (of pilgrims) as the wali {guardian} of the believers, male or female, saying:

The important and noteworthy point is that at the beginning of his speech, the Prophet (S) asked:

ألست أولى بكم من أنفسكم؟
“Have I more authority over you than you have over yourselves?”

And the Muslims unanimously replied in the affirmative. Therefore, it must be noted here that in this hadith the Prophet (S) meant by the word, “mawla” the absolute guardianship over the believers, and we can conclude that the Prophet (S) had established ‘Ali (‘a) in the same position which he had. And on that very day Hassan ibn Thabit versified the historic event of Ghadir as follows:

Their Prophet calls on them on the day of Ghadir Khumm; now, listen to the call of the Prophet:
Then he said to the people: “Who is your Master {mawla} and your guardian {wali}? Then, without showing inattention, they said:
“Your Lord is our Master {mawla} and you are our guardian {wali}, and no one among us today disobeys you.”
Then he said: “Stand up O ‘Ali! For, I am indeed well pleased that you are the Imam and guide after me.”
{Then he said:} “Therefore, of whomsoever I am master, ‘Ali is his master also. May you be their true supporters!”
He then prayed, saying: “O Allah! Be Thou a Friend of those who are his (‘Ali s) friends, and be Thou an Enemy of those who are his enemies.”4

The hadith on Ghadir is among the mutawatir5 hadiths, which is narrated not only by the Shi‘ah ‘ulama’ but also by approximately 360 Sunni scholars6 and the number of transmitters reaches 110 Companions. Twenty six prominent Muslim ‘ulama’ have written a separate book about the chain of transmission and transmitters of this hadith.

Abu Ja‘far Tabari, the renowned Muslim historian, has compiled the chain of transmission and transmitters of this hadith in two bulky volumes. For further information, one may refer to the book, Al-Ghadir.