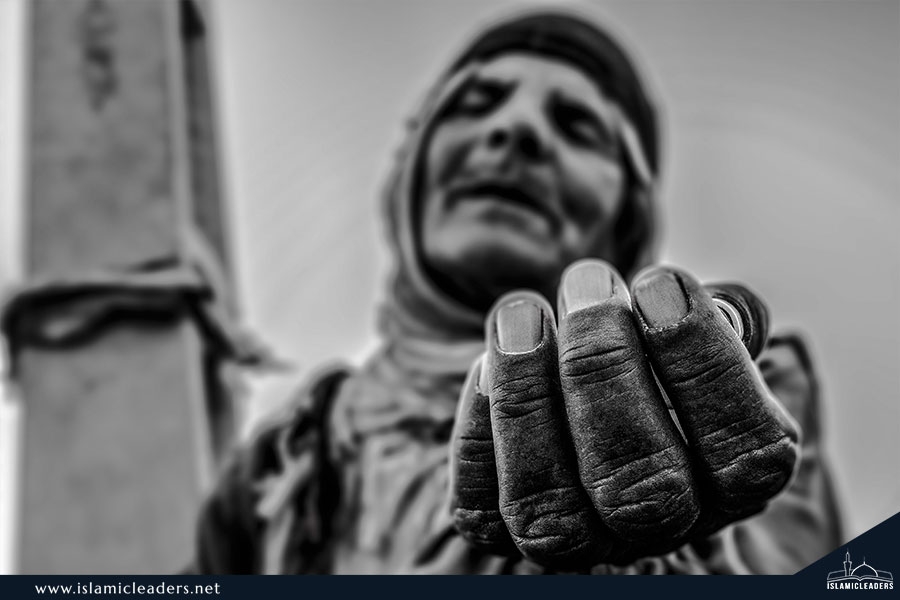 2516 0 share 0
Related Links
What is the incident of Fadak?
In the commentary al-Durrul Manthur, it has been narrated from Ibne 'Abbas that when the verse: "Then give to the near of kin his due" was r...
Islam & Religions » History of Islam
Tasbeeh of lady Fatima (A) (story)
Lady Fatima (A) used to work very hard in her house. She used to grind the wheat into flour using a stone. It would make her hands very sore...
Qur’an & Ahl al-Bayt » Stories and Narratives
What's the reason behind the naming of the Lady Fatima (as)?
A name is typically given as a characteristic that defines the one that it is bestowed upon. From various traditions, it appears that the la...
Qur’an & Ahl al-Bayt » Infallibles » Lady Faṭima al-Zahra (a)

Once an old, poor man came to the Prophet (S) asking for help. The Prophet (S) told him that he had no money at that time, but he asked him to go and ask for help from his daughter Lady Fatima (A). The man was directed by Bilal and he came to the house of Lady Fatima (A) and said, "Salamun Alaykum, O Household of the Prophet, O Household where the angels visit and where Jibraeel comes down with Allah's words. I am a poor and hungry man, please help me." Lady Fatima (A) had nothing to give to the old man except a necklace that her cousin (Imam Ali) had gifted to her. She was so generous that she took it off and gave it to the old man, telling him to sell the necklace and use the money.

The man took the necklace to the Prophet (S) who was in the mosque with some Muslims. The Prophet (S) asked the people who would buy it to help the poor man. Ammar Yasir, who was a friend of the Prophet (S), asked the man what he would like for the necklace. The man asked for a meal, a shirt and some money. Ammar gave him much more than he had asked for and the old man left, delighted with his good fortune. Then, Ammar told his servant to return with the necklace to the house of Lady Fatima (A) and to tell her that he had sent the necklace and the servant as a gift. Lady Fatima (A) thanked the servant for bringing the necklace and gave him his freedom. When the servant whose name was Sahm, heard that he was free, he laughed. Lady Fatima (A) asked him why he was laughing. He said, "What a special necklace this is! It fed a hungry man and gave him clothes and wealth. Then it freed a slave and now it has returned back to its owner!"1

We learn from lady Fatima (A) that:
Never turn a begger away.
Always be generous with your things
If you give charity with a good intention, then you always get back from Allah more than you spent.

Allah has asked you to be kind and obedient to your parents. Your parents’ happiness will protect you like a shield against His anger and displeasure.2