The Mi'raj of Prophet Muhammad (s) 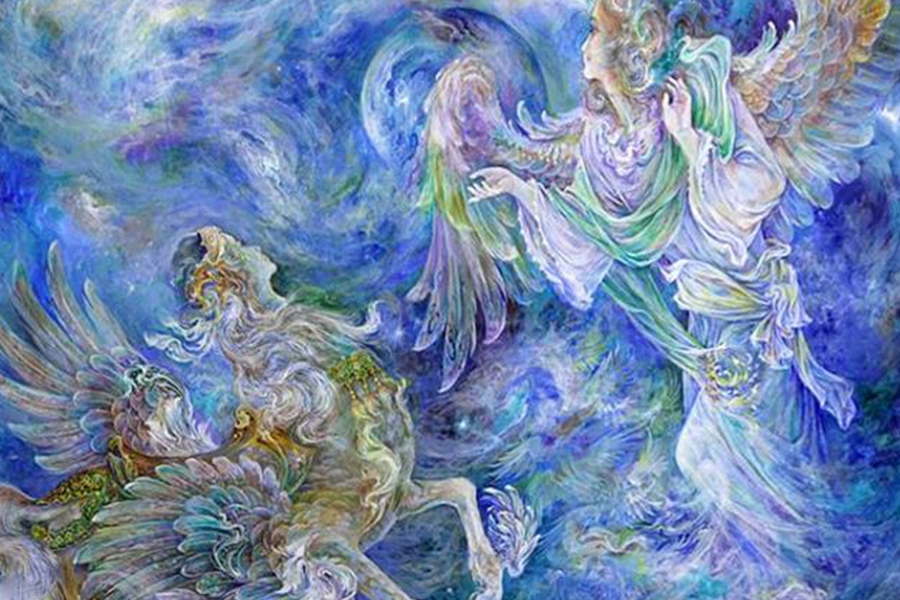 In Arabic, mi’raj means anything that helps one ascend and go up. In hadith and tafsir terms though, this term refers to the materialistic journey of the prophet (pbuh) from Mecca to Jerusalem, and from there, to the skies and back home again. What can be deduced from traditions is that such an ascension with such characteristics, only took place once and only for the prophet of Islam (pbuh), although some stages of the journey resemble some of the experiences other prophets like Prophet Suleyman (pbuh), Prophet Idris (pbuh) and Prophet Isa (pbuh) have had, and although other mi’rajes might have taken place for the prophet (pbuh) as well.

At the same time, there are different hadiths regarding the time of the mi’raj, but it can't be said for sure when it was. Of course, as with other similar incidents, not knowing the exact date doesn’t cause the least doubt about the incident itself taking place.

After the Mi’raj, the prophet (pbuh) came straight back to Mecca and informed the Quraysh of this very important incident and brought evidence to back himself as well. Also, throughout his prophethood, he would mention the different things he seen and experienced (the ones he could) in a simple way for the people, many of which have been recorded in hadith sources.

We will break down your question into different ones and analyze each separately:
1- What mi’raj means and how it has been used in Islamic texts.
2- Have other prophets also experienced mi’raj, or is it something that only belongs to the prophet of Islam (pbuh)?
3- How many times has mi’raj taken place for the prophet (pbuh)?
4- When did the famous Mi’raj exactly take place?
5- What did the prophet (pbuh) see in the Mi’raj?
6- How did the prophet (pbuh) return from the Mi’raj and what did he do afterwards?

We will engage in answering each of these questions respectively:
1- In Arabic, “mi’raj” means something that helps one to ascend and go up, hence using this word to refer to “ladder”.[1]

In the first verse of surah Isra, the Quran says that the prophet (pbuh) miraculously covered a long distance between Mecca and Jerusalem (The Dome of the Rock) in one night with the help of Allah (swt); this journey serving as the beginning of an even longer journey to the skies and witnessing the signs of Allah (swt). This second part of his journey has been mentioned in the following verses of the surah.

Nevertheless, it must be noted that the Quran doesn’t use the term “mi’raj”, it is only hadiths that refer to the night of the prophet’s (pbuh) journey as “the night of the Mi’raj” (Leilatul-Mi’raj), the reason maybe being that the prophet (pbuh) used a means of transportation that night called the Buraq[2] to ascend to the skies.

Anyways, from here on, when we use the term “mi’raj”, what we mean is that specific famous miraculous journey of the prophet (pbuh) to the skies (that the Quran has also spoken of).[3]

2- As for whether this miracle only belongs to the prophet (pbuh), or there are other prophets who also experienced it, one must say that it isn't logically and religiously impossible for other prophets to have miraculously travelled with high speeds on the earth and in the skies to witness Allah's (swt) signs, but what can be understood from hadiths is that such a mi’raj (in which a prophet goes to the skies and returns to the people telling them of what he has seen and continues his call to Allah (swt)) hasn’t taken place for any other prophets.

Of course, there are verses of the Quran that speak of Prophet Suleyman’s (pbuh) quick journeys to different points and with the help of winds[4], or speak of the ascension of certain prophets to the skies like Prophets Idris (pbuh)[5] and Isa (pbuh)[6], but as was said, none of them were like that of the prophet of Islam’s (pbuh), because Prophet Sulyman’s (pbuh) travels were only in this world and the ascensions of Prophets Idris (pbuh) and Isa (pbuh) to the sky never ended in them returning. According to hadiths, Prophet Idris (pbuh) passed away in the skies[7] and Prophet Isa (pbuh) is still there awaiting the emergence of Imam Mahdi (aj) in order to aid him.[8]

In Arabic, mi’raj means anything that helps one ascend and go up. In hadith and tafsir terms though, this term refers to the materialistic journey of the prophet (pbuh) from Mecca to Jerusalem, and from there, to the heavens and back home again

3- Although we believe that Allah (swt) has the power to take the prophet (pbuh) on more than one mi’raj, nevertheless, what Quranic verses and almost all hadiths on the subject tell us is that such a mi’raj only took place once for the prophet (pbuh).[9]

First of all, their number is so little that it can't be compared with the many hadiths that directly or indirectly say it only happened once, thus not being able to stand in their way.

Third of all, it is okay to say that the prophet (pbuh) had only one materialistic mi’raj in which his material body was involved in, while he had many other spiritual mi’rajes in which his soul only made the journey and that the hadiths that speak of the repetition of his mi’rajes are pointing to these ones; mi’rajes that are also possible for individuals who aren't prophets, as some hadiths say that the prayer is the mi’raj of the believer.[14]

4- One must pay attention to the fact that in historical events, the lessons to be learned are far more important than knowing the exact time in which the event has taken place and other similar details. This is actually considered distancing from the event itself, and might be the reason why in the Quran, Allah (swt) has mentioned the stories of many prophets, but doesn’t say when they were born, when they were chosen or when the passed away, and in other than one case, how long there prophethood was![15]

The Mi’raj took place at a time in which Islam hadn’t taken root yet and Islamic historiography wasn’t common, giving rise to “the differences regarding its exact date; some say it happened on the 27th of Ramadhan in the tenth year of the prophet’s (pbuh) prophethood, some say it was on the 17th of Ramadhan in the twelfth year, and some say it happened in the advent of his prophethood”.[16] Therefore, if you plan on commemorating or celebrating the Mi’raj, you can do it on any of these days, or even another day that suits you, what is important is for this incident to be analyzed and explained for others.

5- According to the first verse of surah Isra’, the prophet (pbuh) was shown Allah's (swt) signs in the Mi’raj. On one hand, we know that everything the earth and skies encompass, including humans, are all the signs of Allah (swt)[17], and on the other hand, we also clearly know that in the Mi’raj, Allah (swt) didn’t want to introduce his normal signs to the prophet (pbuh), but wanted to show him His exceptional and great signs that only he had the capacity of seeing; signs that the aforementioned verse refers to as “آیات ربه الکبری” (His Lord’s great signs).[18]

Surely, everything that took place for the prophet (pbuh) on that journey couldn’t be narrated for the people and we don’t bear the capacities to comprehend them, nevertheless, many hadiths disclose some of what took place that night. Of course, unfortunately due to the inappropriate halt that took place in the writing and recording of hadiths, there are discrepancies in the hadiths that explain this incident, although there is no doubt about its occurrence. This has given rise to Sheikh Tabarsi categorizing these hadiths into four main groups, giving an example for each and saying what standpoint we need to have regarding each group:

a) Hadiths that are mutawatir (a hadith that has been narrated so much and by so many different narrators that one becomes sure that all of them couldn’t have lied or been mistaken, thus one becomes sure that the hadith has been said be one of the infallibles) and we are certain of their authenticity, such as the hadiths that mention the incident itself and don’t get into the details; naturally, these hadiths should be accepted.

b) Hadiths that mention some details that are in no conflict with religious and intellectual fundamentals; such as the ones that say the prophet (pbuh) was in the skies and met with other prophets and saw heaven and hell and Sidratul-Muntaha and the Arsh. These cases are also accepted and are considered to have taken place for the prophet (pbuh) in his wakefulness, not like others who might experience such while not being awake.

c- Hadiths that actually seem to be in contradiction, but can be explained in a way that will resolve it. Hadiths like the one that say the prophet (pbuh) saw a group in hell and another in heaven. The question that comes to mind is that the hereafter hasn’t come yet, so how can there be people in heaven and hell? This question and apparent contradiction can be resolved by saying that what he saw wasn’t the heaven and hell of the hereafter, but was the hell and heaven of the Barzakh (the time from death till resurrection is referred to as the Barzakh), or that it wasn’t actually the people themselves who were in hell and heaven, but was their apparitional forms. Hadiths like these also need to be accepted (of course keeping their true meanings in mind).

d) Hadiths that neither comply with religious and intellectual principles, nor can be explained in a way that will fix the problem, such as the hadith that says the prophet (pbuh) and Allah (swt) sat next to each other on the same throne! Hadiths like these need to be rejected.[19]

Since the hadiths on this subject are so many, we can't list all of them and analyze each one separately, but if you like, you can refer to books and articles written on the subject[20], or if there is a specific hadith that you want to be explained, you can send a separate question about that hadith only, and we will inshallah answer it.

6- As for how the prophet (pbuh) returned from the Mi’raj and what he did afterwards, according to some hadiths, he went straight back to Mecca from the skies and paid Abu Taleb who was worried for him a visit.[21] After that, he informed the Quraysh of his journey and answered their doubtful questions regarding it. For instance, they asked him about what Jerusalem was like[22] and about one of their caravans that was moving on that route[23], and he correctly answered all their questions.

There are also hadiths that show that the prophet (pbuh) would speak on occasion of his experiences and the things he had seen. He would say “اسری بی” or “عرج بی”; you can search these two phrases in Islamic software to see the different things he has been narrated saying.